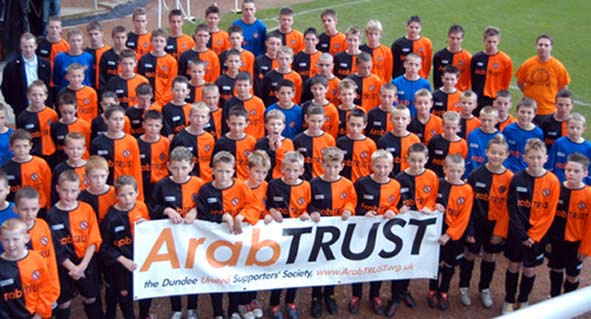 You may already be aware that in early May an exciting new development was announced by DUFC on its website. Three supporter’s organisations, each with a long record of fund-raising to provide financial support to DUFC, especially in the area of youth development, have agreed to join forces. From now on ArabTRUST, Dundee United Business Club and DUDA will pool their intended contributions and dedicate those combined funds to targeted support for youth development in order to enhance and augment that programme and improve the longer-term prospects for Dundee United’s success and restore it to its proper position as one of the foremost clubs in Scotland.

Representatives of the organisations have formed the Dundee United Youth Development Board, which has the support of DUFC but will be independent of it. As well as the financial input from each organisation, contributions will be sought from individual supporters who also see youth development as crucial to the Club’s future and want to contribute directly.
The Youth Development Board will liaise with the Club and work directly with the Youth Academy staff to identify areas where additional funding can make a key difference.

To allow supporters to find out more about this important initiative, a Youth Development evening will be held at 7pm on Thursday 18 May in the Hegarty Suite at Tannadice Park. Youth Academy staff and Development Squad staff will be in attendance (Darren Taylor, Brian Grant, Dave Bowman) and there will be a presentation on the Club’s Youth Programme. There will be a Q & A with staff to follow.

You are cordially invited to attend and your support would be much appreciated.