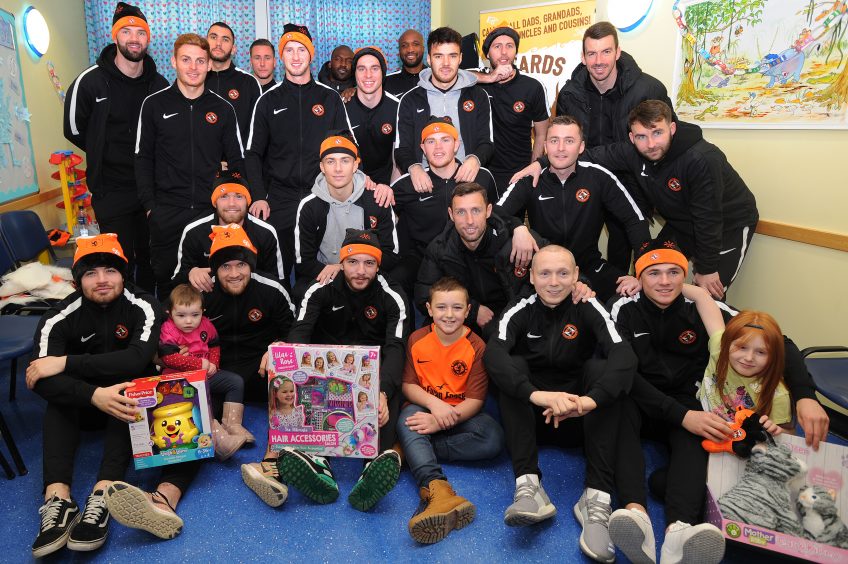 It is certainly good to see that Csaba has got the team playing well and so on the park there is certainly cause for optimism as we approach what will be one of the biggest games of the season on Friday night v St Mirren. The fans have already shown their backing for the team by snapping up all the advanced tickets and hopefully many more will be able to buy tickets on the day. Hopefully the away support will get to see a full 90 minutes of game this time unlike our aborted trip to Dumfries earlier in the month. It was certainly frustrating having travelled all that distance not to see a full game and we would encourage both clubs to agree a sensible pricing structure for the rearranged game to get as many fans there as possible.

It was great to see Willo Flood being named our player of the month for November after some superb performances and it was also good to see him back on the bench for the Livingston game following a quicker than expect recovery from injury. Willo is pictured with Mirren Campbell one of our volunteers in the TTPs on match days. There will be opportunities for our members to win the chance to present future POTM awards before the end of the season.

Off the park we’ve been pretty busy culminating with a Foodbank collection at the Livingston game which again saw fantastic support from both sets of fans, we had over thirty volunteers out before the game collecting food and cash donations which will be divided equally between Taught by Muhammad and Dundee Foodbank, we collected a total of 625 Kilo of food donations and £1,810 in cash also donated at the game and a further £484 donated through the Community Trust's JustGiving page, the page will still be live until early in the new year and you can donate by clicking here

We were also supporting Santa at the Livingston game visiting the Family Zone before the game with just under 100 kids receiving a present.

A big thank you to all those who bought tickets in our Christmas Raffle, all the winners should now have been contacted and I hope you enjoy the prizes which you won. The raffle raised just under £2000 and this will be split equally between the Dundee United Community Trust and the Dundee United Youth Development Board. For those that didn’t win this time we will hopefully be arranging for other opportunities to win some great prizes and experiences between now and the end of the season.

It was also good to see the appointment of 2 new full directors to the board recently. This is something that is long overdue and with both David’s and Jimmy’s contacts in and around Dundee this should be positive for the club moving forward.

In terms of ArabTRUST we are now in the process of finalising and signing off our annual accounts which should be approved at our board meeting on Thursday 4th January. Full details of these will be made available to our members in due course and they will also be discussed at our AGM which will is likely to be held in March, a confirmed date will be issued early in January.

We have also be in touch with all other supporters groups to ask if they would like to be involved in forming a steering committee to organise a lasting tribute to Jim McLean. If any individuals would be interested in becoming involved with this please contact us at yoursay@arabtrust.co.uk.

We hope to organise the first meeting at some point in January.

Finally thank you to all those that have expressed an interest in joining our board. We will be speaking to all applicants over the next few weeks and will confirm any additions to our board shortly after that.

Wishing you all a happy and prosperous New Year