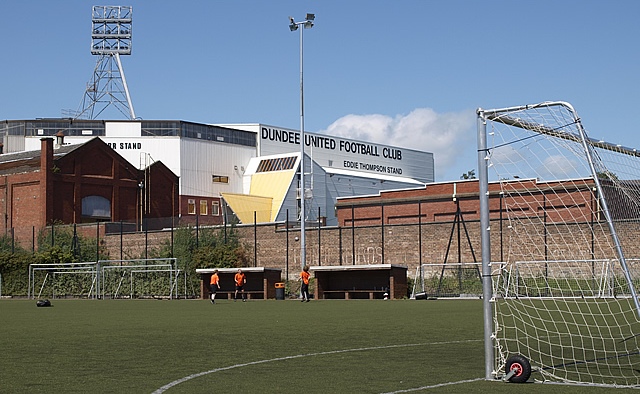 Dundee United Chairman Stephen Thompson has praised both ArabTRUST and the Federation of Dundee United Suppporters Clubs for the substantial five figure investment in the Gussie Park regeneration raised by the fan's groups.

Speaking to the BBC, the club Chairman announced that United are set to spend £300,000 installing a new FIFA two-star synthetic surface to upgrade their training facility at Gussie Park.

Chairman Stephen Thompson said: "We are re-investing a chunk of the money we have made in recent transfer fees.

"It will give us a top facility for our youth teams to train and play on."

He went on to praise both ArabTRUST and the Federation of Dundee United Supporters Clubs for their fund-raising efforts.

"ArabTRUST and the Federation of United Supporters have been a great support in this and they have contributed a substantial five-figure sum to the redevelopment of Gussie Park," he added.

"This is a major commitment and investment in our youth and community programme."

ArabTRUST Chairman Steven Hughes said "I’m delighted that after over 2 years of fundraising by ArabTRUST members and all United fans, the club are now able to provide their portion of funding to refurbish Gussie Park – the home of the Dundee United Youth Academy.

"A huge thanks goes to everyone who has contributed, be it through their ArabTRUST membership fees (we put a whole year’s worth directly to the project), Executive & Centenary Silver Patrons and those who purchased the 1909 Club tickets."

Steven said "The club funding has been helped by the sale of a graduate of the Youth Academy (Ryan Gauld) and is fantastic that future Academy kids will now be able to enjoy the enhanced facilities at Gussie Park.

"Even with the club in a far better financial position than we have seen for many years, the hard work does not stop here – it is crucial that all United fans continue to back the Youth Academy and what better way than to join ArabTRUST? Your £15 annual subscriptions are provided directly to support the Academy, be that through provision of playing and training kit or helping fund the new mini-buses.

"Joining is easy, be that through our newly improved website or by filling in an membership form and handing it in to one of our shops inside Tannadice.

"Finally, with Christmas just around the corner, keep an eye out for our range of merchandise including the now annual Santa is an Arab hat, a Festive raffle and a couple of other special items. What could be better than Tannadice full of tangerine Santa hats to beat Celtic and Dundee over the festive period?"