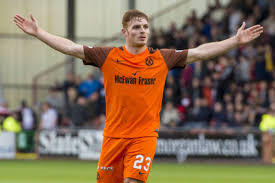 We are delighted to announce that Frazer Fyvie has topped the list to win the ArabTRUST September 2017 Player of the Month, while its been a tough start for Frazer at United he's really been delivering the goods over recent games and his two goals against Dunfermline pushed him over the line to wins this months award.

Frazer was pushed in the poll by both Mark Durnan and Scott McDonald but over the piece Frazer was a worthy winner, congratulations from all at ArabTRUST and thanks to everybody who voted.