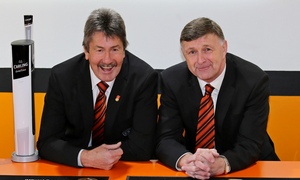 Paul will be presented with a seat for life in the Directors’ Box at Tannadice and will represent the Club at events, including home games where, alongside Hamish, he will be present in the hospitality areas and the boardroom.

‘Heggie’ served United on 707 occasions and scored 82 goals and his association with the Club now continues for over 30 years as a player, coach and Manager.

Head of Commercial Paul Reid said, “Dundee United is delighted that Paul has accepted our invitation to become an Ambassador. He is one of our best players and highly respected by everyone, and alongside Hamish, he will represent the Club with aplomb. Hamish has been a massive success as Ambassador and it is fantastic that we now have two major Club legends around the Hospitality area on matchdays.“

A delighted Paul Hegarty said, “It is a massive privilege to be asked to be a Dundee United ambassador. This Club has been a huge part of my career and my life, and I am proud to accept this magnificent gesture.

“To be back at Tannadice on a matchday meeting guests and to watch the team in action is an exciting prospect and I will carry on promoting the name and reputation of Dundee United to the best of my ability. I am looking forward to the Hibs game and continuing my long United journey.”