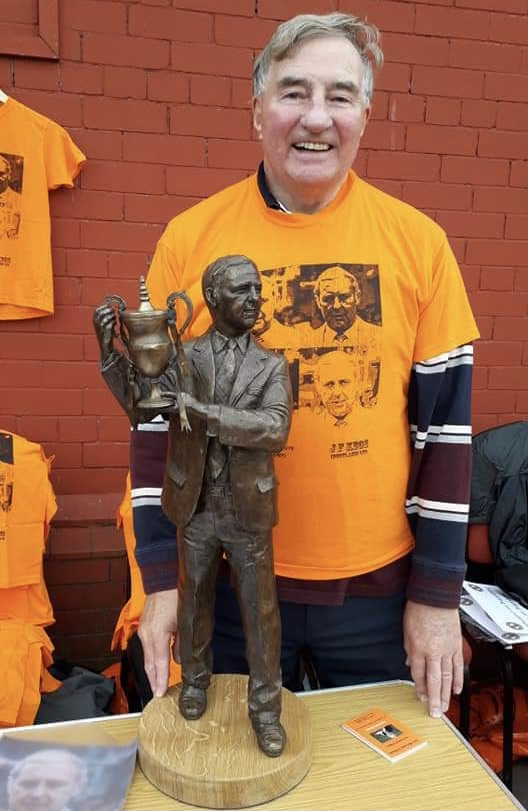 Where do you start to pay tribute to the Jim McLean Statue Tribute Group?

ArabTRUST wish to put on record their gratitude to the work done by The Group to take this idea to reality.  Well done to supporters groups ArabTRUST, DUBC, DUSF, ULT83 and the independents who formed the group and steered a dream into a a result that Jim McLean would have approved of.

But for lockdown restrictions, the statue of Jim McLean would already be installed at Tannadice.  The statue is a tribute from the Dundee United fans who regard Jim McLean as our greatest ever manager.

The Jim McLean statue to be unveiled on the day before Dundee Derby at 5:30pm on Sat 18 September.

As well as the considerable fund-raising involved, a lot of extra work has gone into the project.  Alan Herriot the sculptor devoted a lot of time to get the statue of Jim just right to depict him as he was on the day he first held aloft the League Trophy. Alan studied photographs and video of Jim and liaised closely with the family to move from two-dimensional images to the 3-dimensional proportions of the statue which is larger than life.

Fans have taken pleasure in seeing the cast maquette of the statue which was prepared as part of the deign process.  This was on display at the Open Day at Tannadice and then as part of the Jim McLean exhibition at Tannadice as well as at the Dundee Rep for the production of “Smile”. The maquette will now be presented to Doris McLean and her family.

Peter Carmichael of Carmichael Baxter Groundworks put a lot of detailed planning into the plinth and groundworks in proud black and tangerine colours ready for the statue.  Stuart Jamieson of Norman Jamieson Ltd has transported the statue from the Powderhall Bronze Foundry and installed it at Tannadice ready for the unveiling.

Just to whet you appetite, Alan Herriot was also commissioned to provide a few extra additions to the plinth which will delight the family and the fans and will enhance this fitting tribute to Jim McLean.

ArabTRUST are honoured to be at the heart of the Jim McLean Tribute.  Susan Batten represented ArabTRUST on the Statue Steering group.  ArabTRUST organised a number of fund raising events.  ArabTRUST are proud to have stepped up to the mark; shown their commitment and supported this project.  ArabTRUST are always one of the first to support the Club and associated community work in Dundee.  We are further delighted that George Haggarty has become an ArabTRUST member and look forward to him joining us in making life better for the Dundee United Family."

The statue will be unveiled on Sat 18 September at 5:30pm.  Doris McLean and family will be guests at the ceremony hosted by Dundee United.  Chairman Mark Ogren will attend with many of the Dundee United legends who owe their career to Jim.  Afterwards the statue will be open to public visits until 8pm and next day when we hope to celebrate with a victory over Dundee in the Derby.

This Tribute was adapted from an article in The Tangerine View, published by Dundee United Youth Development Board in August 2021.