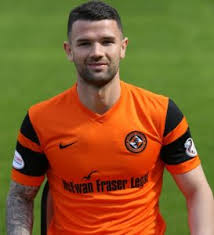 I'm delighted to bring you Mark Durnan as the ArabTRUST February 2017 Player of the Month, in whats turning out to be a great season for Mark this is another marker that the fans are really appreciating his performances and goals.

With the season starting to move to the sharp end I'm sure everyone will join us in congratulating Mark on his February PotM award and wish him well in helping to deliver the promotion back to the top league that we all so desperately want.