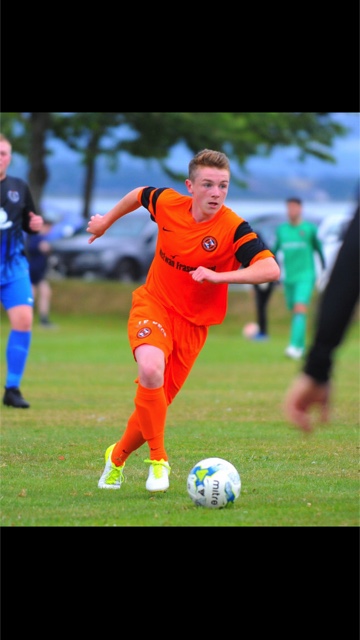 As part of what will be a new series for ArabTRUST members and the wider fan base we got together with Kieran Inglis who signed his first professional football contact at Dundee United in the summer and his dad David, we hope you find the article interesting and if you have any thoughts on who we might talk to next let us know.

A conversation with Kieran and David Inglis September 2017

Recently we sat down and had a chat with under 20’s player Kieran Inglis and his dad David, Kieran stepped up from the Academy in the summer of 2017.We talked about the journey that took him from Craigowl Primary School up in Brackens Dundee to his first professional football contract at Tannadice and along the way attending the Performance Academy based at St John’s High School.

The Academy is open to both boys and girls with the aim to bring together the best young footballers from the area into a four year training and support programme with the aim to ensure that the pupils achieve the right balance between sport and academic school life.

From an early age both Kieran and his older brother Kris were very much into their sport but while Kris played both football and Ice Hockey which ultimately would lead to him signing for the Dundee Stars Ice Hockey Club, Kieran was always more focused on his football. He played youth football with the local Dundee Rovers, Dundee Athletic and then Dundee Celtic Boys clubs - watched every week by his mum and dad.

Through the years in the Sunday league, Kieran would play a game at the weekend and train anything up to four times a week and then have an extra session with Ian Cathro at his football clinic. Over and above that he found time to play some golf - a pastime that he still keeps up, but there were sacrifices to be made with less time spent with friends than other boys his age but Kieran’s focus was always on learning - both on the football park and in the classroom.

With two such sports minded brothers both David and Charlene’s commitment to supporting their sporting development shouldn't be overlooked or undervalued and talking with David and Kieran it really feels as if its been a real team effort over the years.

On leaving Craigowl Primary Kieran entered the SFA Performance School based St John’s High School in Dundee, both parents did have initial reservations about the amount of additional commitment Kieran would be taking on over and above the normal classroom pressures. Kieran's school days would start at 8.00 and run through to roughly 18.00 with a mix of classroom and training ground through the day with a session in the gyn often included at lunchtime In some ways, Kieran sees himself as one of the fortunate ones as he lived in Dundee while others had to travel from the likes of Fife and Aberdeen.The Performance School shouldn't be seen as a school within a school as when Kieran and his fellow Academy pupils weren't on the training ground they were very much treated the same as all the other pupils at St John’s.

Kieran kept up the above schedule for four years then stayed on an extra year with the clubs full support to successfully take his highers. Looking back over the five years Kieran and David both emphasised how positive they felt the experience was with lots of support from both the school staff and fellow pupils. One of the downsides of being part of the elite Performance School was that Kieran wasn't allowed to play for the school football team until he reached fifth year at which point he played a few games - including a winning cup final against Grove Academy (he was the captain that day).

Kieran was originally selected to join the Performance School by Ian Cathro under the direction of former Performance Director at the SFA Mark Wotte, unfortunately after being selected Kieran didn't get the chance to continue to work with Ian Cathro as he had just left to take a coaching role at Rio Ave in Portugal. He was initially coached by future Dundee United manager Ray McKinnon and then Iain Jenkins.

While at the Academy, Kieran was subject to ongoing game and training reviews plus two formal annual performance reviews usually in December and the season end. It was through this review process that Kieran was invited to sign his first professional football contact at Dundee United. He did sign and started in early July 2017. His usual days at the St Andrews training centre start at 9.00 with gym work then on to the training pitch at 10.30 for a session then lunch then out again for another session in the afternoon.When you add in his duties looking after the first team boots and kit you can see its been pretty full on for Kieran right from the start.

The one thing that shone through the conversation with Kieran and David was their pride in making that step into professional football and the commitment its taken from Kieran and the whole family to achieve that goal. That level of commitment is something we as football fans sometimes find all to easy to forget.

We hope you enjoyed the article, everything we do at ArabTRUST is focused at supporting the club right now and one of our main priorities is Youth Development you can help us invest in Youth Development right now by clicking on the below link and joining us.