ArabTRUST and Dundee United working together to fight racism 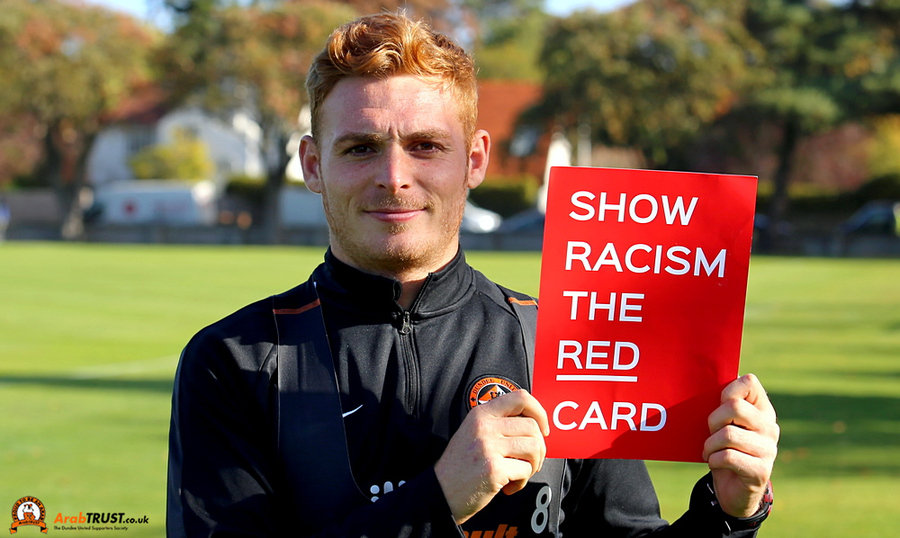 This year's campaign, which runs from tomorrow, 5th to 19th October, shows commitment at the highest level of Scottish football to eradicate racism and discrimination of any form from our game.

All professional clubs will show their support is coming weekend calling for an end to racism in football and society. Players in over 40 European countries are involved in similar events as part of the Football Against Racism in Europe (FARE) network against racism and discrimination.

Dundee United condemns all forms of racism and no racist behaviour will be tolerated within the Club.

Captain Fraser Fyvie stated: “Looking at today’s world, it strikes me as absolutely vital that we keep challenging stereotypes and prejudice in all walks of life. Football can be a blueprint for a better society in that it brings people of different cultures, colours and beliefs together as equals and, as professional players, we are proud to support the work of Show Racism the Red Card each year. On behalf of my team mates and the Club, I appeal to you to embrace the spirit of this campaign and show racism the red card.”

Susan Batten, ArabTRUST Chair, said: “ArabTRUST have a long association with the Show Racism the Red Card campaign. We are proud in continuing our support of such a worthy cause, raising awareness that such prejudice is not tolerated through the use of football. In this day and age, it’s hugely important to get this message over to youngsters. SRTRC is a great way to do so.”

Show Racism the Red Card are working with grassroots football, community groups, schools, the police and prison service to ensure that going forward Scottish society and Scottish football is fair and inclusive for all.

Football is a sport that is followed by people across the world and football matches should be an enjoyable experience for all, whatever their background. We all have a part to play in challenging racism in football and society.

Show your support for tackling racism:

ArabTRUST is the proud sponsor of the Club's inclusion and diversity projects.